Why Should You Refrain From Chasing Happiness? 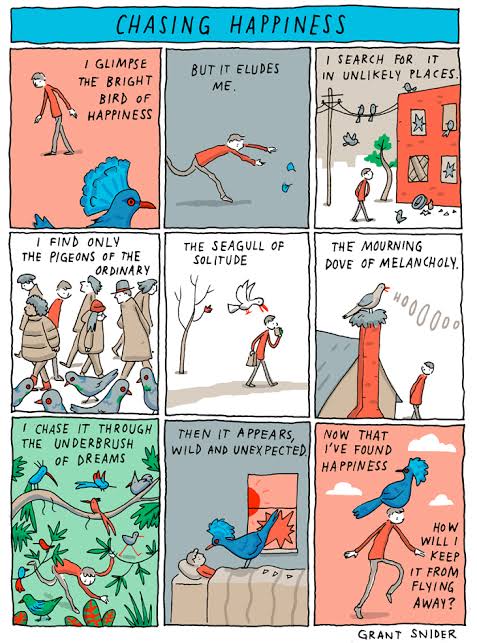 Had happiness been the ultimate panacea, we all would have enjoyed the Netflix and gorged on daily diets of unhealthy & tempting fast foods. But then we all can recollect instances when we had to go through that sh**ty feeling after indulging ourselves in brainless consumption.

If that is the reality then why are we always so obsessed with making ourselves happy?

Because it feels good to get the dopamine rush, a known fact exploited so rampantly by every advertiser. Despite knowing this, we are more than happy to oblige each one of them.

If you are dependent on outer circumstances to make you feel happy, I am afraid you have opted for nothing but a roller coaster ride.

There is absolutely nothing wrong in riding a roller coaster, but then if you are forced to ride it all day long — it ceases to be an adventure ride anymore.

Despite best of our efforts the continuous pursuit of happiness doesn’t bring us anywhere near to the feeling of fulfillment. The inverted U shape correlation between the two is depicted in this figure:

But if the path of pursuing happiness doesn’t lead to a fulfilling life, then what does?

Lots of contemporary self-help gurus advocate acceptance as a viable mode of existence. If you wish to have a certain ease in your life, cultivating positive responses goes a long in fulfilling the desire.

The positive correlation between acceptance and ease of existence is depicted in the following figure:

Buddhist philosophy advocates the same when it says, “a big part of having mindful existence is to accept the reality the way it is. If you happen to hear the harsh, annoying sounds of construction, you might close your window or do something else to tune them out. But the idea is to accept the sounds themselves while not buying into the idea that they are abrasive & annoying.”

In other words, if you stop resisting the “thing,” the thing will cease to have any power to make you unhappy — thereby dissolving the unhappiness in the process.

But don’t you think there’s more to happiness than accepting everything without an iota of resistance?

When something conflicts with your core set of values, acceptance of it will make you undergo through unwarranted discomfort. If you are persistently unhappy doing something, then there has to be some definite reason behind it. A simple denial of it by gleeful acceptance is going to have a deleterious effect on your long term self-esteem.

With a severe dent in conviction in your abilities, how do you expect yourself to realize your real potential and live a meaningful life that you were always meant to?

Although it is often recommended to learn from other people’s experiences when trying to increase meaning in life, we cannot just copy what others do. We have to decide for ourselves keeping in mind what we ultimately stand for (core set of values).

There is a greater possibility of having meaningful life experiences if you are aligned more to the values you stand for. What values do you stand for is something that you need to find for yourself.

However, there is every possibility that even if you succeed in identifying what would add meaning to your life — due to the lack of time and capacities, there is just no way to engage with everything that you might find meaningful.

Therefore the solution lies in priority. Your choice to focus on some pursuits among others involves deepening your engagement & commitment to them, which in turn adds more moments of meaningfulness in your life because you start refraining yourself from chasing mindless doses of Happiness.